As a marathon runner, Jen was accustomed to running through the pain. She tore her meniscus while training for a race and although she tried to take care of it on her own, she ran two more marathons and realized she needed to see a doctor. Three surgeries later, instead of improving, her pain worsened.

“Struggling with my knee issues for more than three years, I felt beaten down both physically and emotionally,” Jen said. “My goal of returning to running eventually changed to just simply wanting to walk down a flight of stairs, kneel at church, walk my dog, or even go one day without excruciating pain radiating from my knee.”

In 2011, she met with Dr. Brian Cole at Rush University Medical Center. He assessed Jen’s situation and told her she was a candidate for a meniscus transplant. She was placed on the waitlist for a new meniscus. After a four-month wait, a match came up. Donor cartilage must be matched with a recipient based on size in order for the transplant to have the best chance of success.

The procedure was more invasive than her previous surgeries and Jen faced a challenging recovery. Although she struggled with aspects of her healing process, her donor and donor family were never far from her thoughts.

“The actual thought of having another person’s tissue in my body has never bothered me,” she said. “To the contrary, it provided perspective during some of the most difficult times throughout my recovery. The loss of life and the struggle their family endured because of it helped me appreciate all that I have and provided motivation for me to get back to 100 percent.”

During her recovery, Jen set a goal for herself: she wanted to run one final marathon as a tribute to her meniscus donor. She accomplished her goal in October 2014, completing her fourth and final race. She sent her finisher’s medal to her donor’s family to express her gratitude.

“There are truly no words to describe how appreciative I am for the opportunities I’ve been given with my new meniscus,” she said. “The pain of my own torn meniscus pales in comparison to the pain of the family who lost their loved one.” 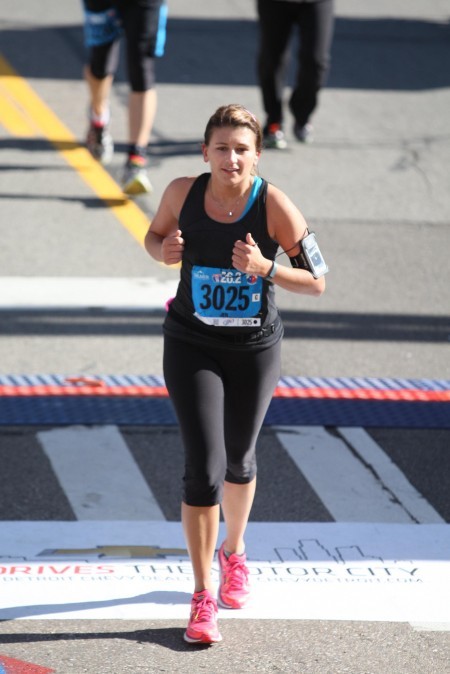